At Vana-Fest 2008, the developers announced three new add-ons, the first of which came out in Spring 2009.
The first part of a fourth, free, scenario was added in the August 2020 Version Update.

Ode of Life Bestowing
"One Day, a giant crystal appeared in the sky above Jeuno, triggering a series of unexplained happenings across the land. Now, adventurers will set forth to unravel the mysteries of this primordial crystal that holds the secret of Vana'deil's past."

Evil in Small Doses
"It all started with an innocent drop of rainwater and a rickery, ramshackle Mog House desperately in need of repairs. Little did anyone suspect that this was only the beginning of a harrowing nightmare unheard of in the annals of moogle-kind."

A Legend Torn, Her Empire Born
"The eccentric Professor Shantotto returned to Windurst one day after a mysterious, unexplained absence, shocking her colleagues with behavior so outrageous it put her old self to shame. When she goes so far as to proclaim herself ruler of her own empire, adventurers set out to discover the truth behind her alarming shift in personality."

"Even the smallest of incidents can have ripple effects that alter the course of history. Three individuals of unknown origin have inserted themselves seamlessly into everyday life, their robes murky and their intentions even murkier.

Ony a short time passed before small eggs of unknown origin started appearing in all manner of places throughout Vana'diel - eggs whispered of in the oldest of Beastmen legends.

It falls to Vana'diel's finest adventurers to uncover the truth behind this enigmatic phenomenon. Peer beyond the veil of death and unravel the tangled threads of a conspiracy that threatens the very fabric of the world." 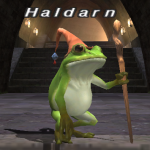