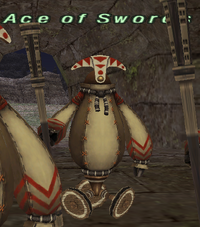 Ace of swords is a reference to a tarot card that fortunetellers and pagans refer to as a “minor arcana”. It’s meaning is often debated between a meaning death or an obstacle to the power of a King.

It is also believed that the Ace of swords evolved into the famous “ace of spades” over the years.

Retrieved from "https://ffxiclopedia.fandom.com/wiki/Ace_of_Swords?oldid=1673206"
Community content is available under CC-BY-SA unless otherwise noted.