Members: Up to 6 party members. Alter Egos may be summoned. 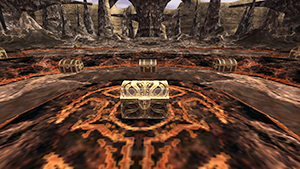 1. Set the Records of Eminence objective “Exploring the Trove.”
2. Speak with Greyson in Lower Jeuno and trade silver A.M.A.N. voucher(s) for a Mars orb or Venus orb.
3. Trade one of the above orbs to the burning circle located in Horlais Peak, Waughroon Shrine, or Balga’s Dais and enter the battlefield.

Between one and six players may participate. The time limit is 30 minutes.

Upon entering the battlefield 11 chests will spawn.

Opening a Chest / Coffer O'Plenty has 4 possible outcomes, 3 of which are indicated in the battle log. None of the text responses from treasure chests guarantees a piece of equipment.

Immune to Stun and Silence. Susceptible to Lullaby.

Phase 1 is a fight against a fairly standard NM. It casts its full complement of spells and uses its physical damage TP skills and Death Trap.

In phase 3, it retains its magic-absorption mechanics and will take now greatly reduced damage of all types and gains the use of Pandora's Curse/Gift.

In phase 4, the fight reverts to Phase 1 damage mechanics but Ka-thwack is greatly increased in potency.[4]

and removes the aura gained by Ka-thwack in phases 1-3.

Retrieved from "https://ffxiclopedia.fandom.com/wiki/A.M.A.N._Trove?oldid=1684278"
Community content is available under CC-BY-SA unless otherwise noted.