Dynamis - Windurst (D) has been added to Dynamis-Divergence, bringing along with it the reforging of additional relic armor pieces!

Other changes include the monthly updates to Ambuscade.

* Players may exchange Beastmen's Medals and Kindred's Medals with ??? in Ru’Lude Gardens (G-8) 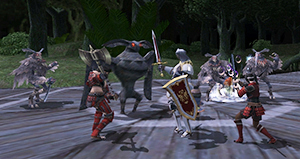 Limitations on Entry
Players will be unable to register for entry if any of the following is true.

- One or more participants do not possess an

Cancelling Registration
Player registration will be canceled if any of the following is true.

- The party leader elects to cancel registration by interacting with the enigmatic footprints.
- Three minutes have passed since the notification indicating that Dynamis - Windurst (D) is ready.
- One or more party members is currently located within a Mog House.
- The applicant leaves the area.
* This also applies if the player uses the black magic spell Warp or other means to travel to a home point within the same area.
* This also applies if the player moves to a Mog House.
* Registration will not be canceled if a party member other than the leader leaves the area, but that character will be unable to enter.
* The number of party members may be increased from the number registered, but players will be unable to enter until the number of players is equal to or less than the number registered.
* Players may enter with fewer party members than applied for, but this will not affect the number of alter egos that may be called forth.

4. The party leader must examine the enigmatic footprints when they receive notification that Dynamis - Windurst (D) is ready.
5. Vanquish the monsters and bosses found within Dynamis - Windurst (D).
If there are any players in the area who have not yet vanquished the bosses or mini-boss, all players will receive personal rewards upon success.
* The time limit is 60 minutes (Earth time).
* The time limit will increase if certain objectives are successfully completed.
* A message will be displayed if the player does not have enough space in their inventory to receive personal rewards.
* When wave 3 starts, all remaining monsters from wave 2 will vanish when wave 2’s boss monster has been defeated.
* Players will be automatically removed once the time limit has passed.
* Players may use the Black Hourglass temporary item to leave early.

Retrieved from "https://ffxiclopedia.fandom.com/wiki/2018_-_(02/09/2018)_The_February_Version_Update_Has_Landed!?oldid=1626545"
Community content is available under CC-BY-SA unless otherwise noted.