"Sakura and the Cactus Corps" 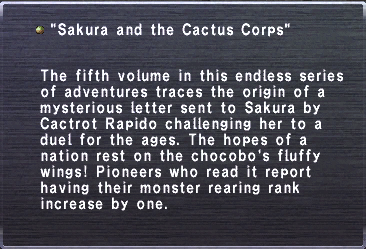 "Sakura and the Cactus Corps"
Description:
The fifth volume in this endless series of adventures traces the origin of a mysterious letter sent to Sakura by Cactrot Rapido challenging her to a duel for the ages. The hopes of a nation rest on the chocobo's fluffy wings! Pioneers who read it report having their monster rearing rank increase by one.
Obtained:
Purchased from Zenicca for 9,000 bayld or Skipper Moogle for 160,000 gil after obtaining

"Sakura's Excellent Adventure" and "interacting" with your monsters 80 times (does not include Feeding or Collecting Items).
Notes:
Raises Monster Rearing to Rank 6

The "Sakura and the X" line of key items may be a reference to the Japanese animated television series Cardcaptor Sakura, which used the same format for naming episodes. This might be coincidental, however.

The Sakura of which the texts are referring is the baby chocobo of the chocobo racing circuit renown. This is the same Sakura for which you can obtain trust magic. Additionally, the KI text refers to the chocobo with the line reference, "The hopes of a nation rest on the chocobo's fluffy wings". Sakura means cherry blossom in Japanese and is a very common pet name in Japan.