The Treasures of Aht Urhgan expansion pack has introduced a myriad of new battles—from the quick, SWAT-style Assault missions to the citywide skirmishes experienced in Besieged. Salvage continues in this tradition by offering several new exploratory missions designed for alliances. While similar to Limbus battles in that up to 18 adventurers can participate, Salvage battles are more than a relentless assault on a seemingly never-ending wave of enemies—they will require precise teamwork and impeccable strategy to complete.

The main objective of Salvage missions is the exploration of the archaeological remains of four newly opened areas (Vestiges de Zhayolm, Vestiges d'Arrapago, Vestiges de Bhaflau, Vestiges Mer d'Argent) and the eradication the demonic beasts that rule their deepest depths. However, this will not be as easy as it sounds. A powerful force known only as the Pathos of Alzadaal limits the abilities of all who enter, making them easy prey for the hordes of fiends waiting in the shadows. To complete these missions, alliances must work as one, or the treasure that slumbers in the remnants' bowels will remain lost for eternity. 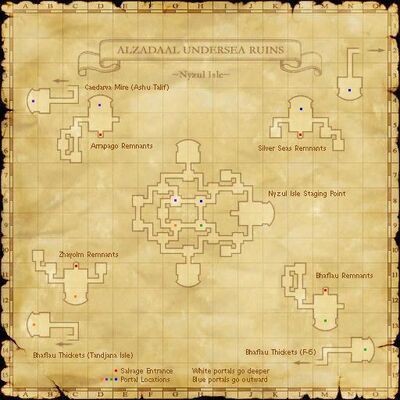 Minimum Number of Players: 6
Maximum Number of Players: 18 (one full Alliance)
Time: Unlike Dynamis and Limbus, you are limited to a set time of 100 minutes to defeat Salvage.
Entering: Upon entering, the Remnants Permit is lost. Entering Salvage works much like entering Assault: one person clicks the door and proceeds through the dialog to start the mission, then everyone in the alliance that is in the zone and in proximity to the door is warped in.
Using teleporters: There is a white teleporter on every level that transports players to another level. When one player activates it, all other players will be warped to another level (including dead players). Reraise status is not lost when teleporting. HP and MP is fully restored after using the teleporter.
Reentering: You may obtain another Remnants Permit after Midnight JST. This is based on the day that the Remnants Permit was purchased, not the day that the character entered Remnants, so it is possible to enter Remnants twice in one day if the character has a pass that was purchased the day before but never used.
Reservation: An area does not become reserved as it does with Dynamis/Limbus. As such, multiple alliances may enter the same area, commonly known as an instanced battlefield. However, they will be considered seperate, and therefore are not able to see each other or work together.
Clearing: Upon defeating the mega boss of a particular zone, a teleporter will become active which will exit the mission with a "success" message instead of a "failure" message. At this time there is no difference between a success and a failure.
Death: As with Dynamis, Experience Points continue to be lost if you are defeated within Salvage. It is not possible to gain Experience or Limit Points through defeating enemies in these areas.

Armoury Crates can be dropped by any enemy in Salvage. These can contain a variety of temporary items. When a chest is examined, the option to take an item out of the chest, or to leave the chest alone is given. all items from these crates are R/E and cannot be traded once taken.

As of the 06/05/2007 Version Update, an armory crate will also spawn on the first floor of each Remnants near the start point. This crate contains 10 imbued items.

The Pathos of Alzadaal Modifier

Upon entering Salvage, you will be unable to equip any armor or weapons, unable to use any job abilities, all stats will be lowered, Support jobs will be restricted and players will be unable to cast any magic. Each monster in Salvage has a possibility of dropping one or more imbued item (also known as cells). These cells can be used to remove one of the effects specific to each cell. Cells can be traded (or Bazaared) to other players.

Note: Players must dispose of any imbued items they bring back from the remains before they will be allowed to re-enter Salvage.

Note: Occasionally, in spite of receiving the appropriate message, a restriction may still seem to be in place after using a cell. Logging in and out of the game resolves this, with the restriction being removed after logging back in. However, any "Reraise" status that was in effect will be lost.

The Armory Crate at the beginning of the level contains:

During Salvage you will find targets called a "Socket" and a "Slot". Trading a Cell to a "Socket" spawns a NM (Notorious Monster) that, upon defeat, drops multiple of the same cell you traded to the "Socket". Trading a Remnants card obtained from another remnants area to a "Slot" spawns different NMs that drop the lv.15 body pieces. It appears now to complete a body piece you will have to visit all 4 zones: 1 area for a card, one area where you use the card to pop a NM for a lv.15 body piece, one area's boss will drop the lv.25 body piece and a somewhat hidden NM in the last area for the lv.35 piece.

Salvage offers rare/ex armor as a reward. This armor is obtained in a fashion similar to Lumorian/Limbus items, requiring a stack of crafted items, ten Imperial Gold Piece currency, and three Rare/Ex drops from Salvage itself. To obtain the armor, you must trade the requested items to Ghanraam at (K-10) in Aht Urhgan Whitegate.

Just as Salvage can be separated into 4 distinct physical zones, it also can be separated into 4 distinct logical routes. The 'logical route' you embark on determines what drops you have the potential to gain. Due to the way in which the individual components for equipment are distributed across the zones in Salvage, every piece of completed equipment will require 3 different components from 3 different zones, although body armor will also require getting a remnants card from a fourth area.

The four logical routes, along with the equipment that can be obtained on each route, can be broken down as follows:

There are many interesting patterns to note with regards to Salvage routes. For example, if you are currently working on obtaining Lv. 35 equipment from Route 1, you will be farming in Vestiges d'Arrapago. In general, you will be killing lots of Archaic Gear during this farming as they are one of the only sources of Ampoule duplicatuss (see Vestiges d'Arrapago page for more complete drop information). These gears, however, also drop Lv. 15 armor for Route 2, essentially allowing you to kill 2 birds with 1 stone. A similar overlap exists in Vestiges Mer d'Argent, as the exact same enemies that drop Lv. 15 gear for Route 1, also drop the Lv. 35 gear for Route 2. So, you could say that routes 1 and 2 are connected.

Routes 3 and 4 are connected in a similar fashion, in that farming Lv. 15/35 equipment from Vestiges de Zhayolm will automatically net you the other type of equipment as well